This article was written by DanH and originally appeared on the Alteryx Engine Works blog here: https://community.alteryx.com/t5/Engine-Works/Introducing-the-Alteryx-Server-v3-API/ba-p/899228

With the release of Alteryx Server v21.4, there are a series of new Gallery API capabilities.

Purpose of the Updates

With the addition of the v3 endpoints, you'll notice a much larger set of endpoints, and a focus on administration of Gallery content, including updating, deleting, and creating most types of assets. This ability to programmatically perform CRUD operations on most types of assets allows for a wide variety of administrative use cases, from data-driven user management, to integrated scheduling, to bulk data connection management. Accessing these endpoints is available to Admins (Curator role).

Alteryx Server is moving away from a reliance on Studios for workflow administration to a focus on authorization via Collections. These new v3 endpoints provide new options for this migration, as well as other migration scenarios.

One significant change between v1, v2, and v3 is in the authorization mechanism.

Both v1 and v2 endpoints use the same OAuth1.0a method to sign every single request, and therefore don't reuse a token or signature when sending multiple requests. This OAuth1.0a method relies on "signing" a request by generating a string which contains most of the details about the request, including the base URL, serialized parameters, a random nonce, timestamp, and API Access Secret. The resulting string is hashed with HMAC-SHA1, and that "signature" is sent along as an additional parameter with the actual request, minus the API Access Secret. When the Server successfully rebuilds the signature from the provided values plus the local API Access Secret, then Server knows the client had the correct secret and that the request had not been tampered with.

The new v3 endpoints are authorized for use by providing a valid "bearer token" with requests. To generate the token, you'll need two values- Client ID (aka "API Access Key") and Client Secret (aka "API Access Secret")- which get concatenated together separated by a colon, Base64 encoded, prepended with "Basic " and then posted to the /webapi/oauth2/token endpoint in an "Authorization" header. An "access token" is provided in response, and that token can then be used as the Authorization header value (prepended with "Bearer ") in subsequent calls to any of the other v3 endpoints. The token lives for a total, non-configurable time of one hour, after which time a new token will need to be generated.

Because these endpoints are focused on content administration, their availability opens up a wide range of possible uses, including:

Note that not all content can be directly migrated from environment to another as some concepts such as Gallery shared Data Connections are designed to be environment-specific.

Getting Started with v3 API Endpoints

Alteryx Server comes with the interactive documentation for the API by default. In v21.4, the v3 Swagger documentation will reside at [WEB API ADDRESS]/swagger/ui/index]. This will allow you to see the required parameters for each endpoint, actually issue requests, and see the responses. Note that the base API address is configurable via System Settings with Server v21.4.

There are obviously many possible ways to call API endpoints, including Alteryx workflows. We've built a macro pack to easily interact with these new v3 endpoints. Having Alteryx tooling available for Server API interactions allows for fast and flexible integrations. The pack consists of five macros:

GET Macro - used for reading records

The YXI installer for the Macro Pack is included below. The Macro Pack uses the new v3 API endpoints, which are available starting in Alteryx Server 2021.4. To use the macros, you will also need to be running Alteryx Designer 2021.4.

After installing the macros on a machine with Alteryx Designer, a new tool folder should appear in your Designer called “Server v3 API". Before using the macros, consult the interactive Swagger documentation to understand the parameters that the desired endpoint requires or accepts. The macros allow you to choose an endpoint via the "Action" tab, and that selection then influences what fields are accepted/required for successful execution. For example, the endpoint CREATE /v3/collections/ requires a field called "contract" as a JSON object, so a field called contract with the properly formatted JSON object must be fed to the macro input.

The macros accepting inputs all require a unique "RecordID" field be included with each record, and can easily be generated with the Record ID tool. The macros accepting inputs also expect three fields which are generated by the AUTHENTICATE macro:  "baseURL", "Authorization Token", and "Base64 Key+Secret", all of which should map automatically from the output of the AUTHENTICATE macro. If you intend to send multiple records into a given macro for multiple API calls, group by the unique "RecordID" field in the "Group By" tab. Lastly, you'll note that each of the four action macros provide success and failure outputs. Receiving failure records should allow you to perform validation and exception handling and/or reporting.

A simple process to create a new Collection would look like this: 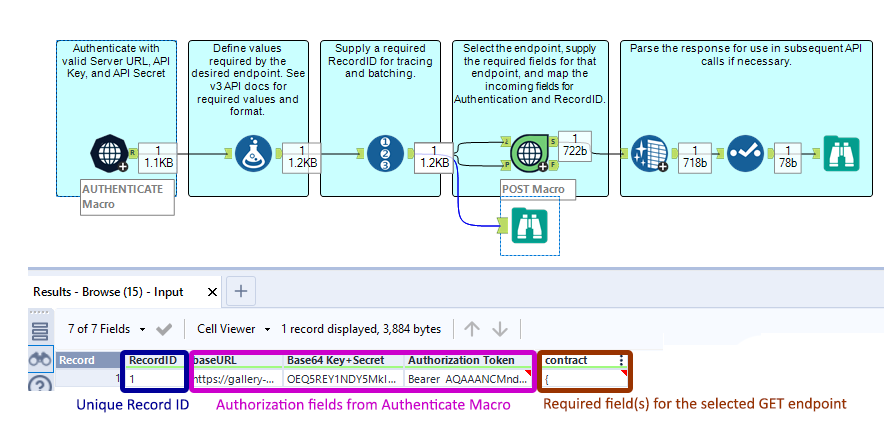 These macros are designed for use with Alteryx Server v3 Gallery API endpoints and validated on Server version 21.4. The macro pack is provided as-is, without warranty. This macro pack is not a part of the base Alteryx Server product. Use of this macro should always be tested thoroughly in a non-Production environment to your satisfaction.